The sun is bright yet glows pale this morning. Its burning brilliance has waned and so it casts a lighter tone on all that it touches. Autumn is reaching into the days, with yearnings of letter writing and hot chocolate. I’ve been making more little changes, with each season. Autumn is about stationery and re-purposing things I’ve collected.

I have fountain pens and ink, though being left-handed, even with a mess sheet pressed over writing I’ve given time to dry, there still ends up being as much ink on me and the table, as on the page. Pencils are wonderful to write with, though fade more quickly and it helps if the written word lingers (especially with letter writing). 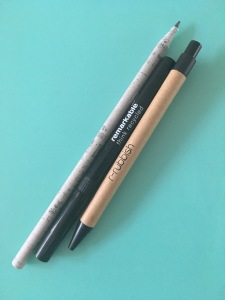 I needed to re-stock so purchased Treewise Pencils (made from newspaper and wood free). For pens, I’ve tried Remarkable’s r-Writer Recycled Plastic Handwriting pen and r-rubbish Recycled Paper Pen. While they cost more individually, bought in a box they are affordable. Treewise Pencils are based in Dubai, though I was keen to try them out. Some brands state that pencils are wood-free, when in fact they are from sustainable forests (also good though not the same thing).

Remarkable are based in Hasfield, so they’re much closer to home (and also stock pencils made from material taken from cars, CD cases and fridges). I like that these items are on their “second life” as I try to give everything I use a second chance to be useful, before I discard it. I’m re-purposing more, to reduce recycling and waste; habits from childhood now taught to my own children.

I’ve kept printed paper after I’ve used it for its purpose, so I can use twine or wool to thread it between plastic or cardboard notebook covers (which I’ve also kept). These “second-chance” notebooks are great for draft writing and list making. I write directly onto the laptop, though find with editing and first drafts, I work better with paper. Though I can only write on the one side most of the time, it means the paper is used again before being shredded and put in pots as filler or nesting boxes for birds. It’s cut down spending and being able to move things already re-purposed, further down the chain of waste, saves pennies and reduces impact a little.

Re-cycling and re-purposing are planetary issues, though they’re also rooted at home; in our local green spaces, in our hearts and minds. We’re making lasting change that grows in number across all areas of daily life. These waves have grown through the last few decades and are becoming the tides by which we map our lives. My efforts are only a drop in the ocean though there are 7.7 billion other drops. As we re-write our habits, we’re writing a future in which we all walk more lightly.

This is not an affiliate post, I simply love this stationery 🙂 Photos copyright LA Knight 2019.