Here are some photos I took while exploring places that inspire storytelling; Castell Henllys Iron Age village in Pembrokeshire and Wroxeter Roman City, in Shropshire. From the fireside earthenware to the loom, these abodes highlight what was important to us then is still important now. The scale and layout give each place a different feel. Narrow paths between closely built roundhouses speak of togetherness, shared tasks and simplicity. The scale of a Roman gymnasium and villa, a long market road cutting between them, hints at bustle, trade and decadence. 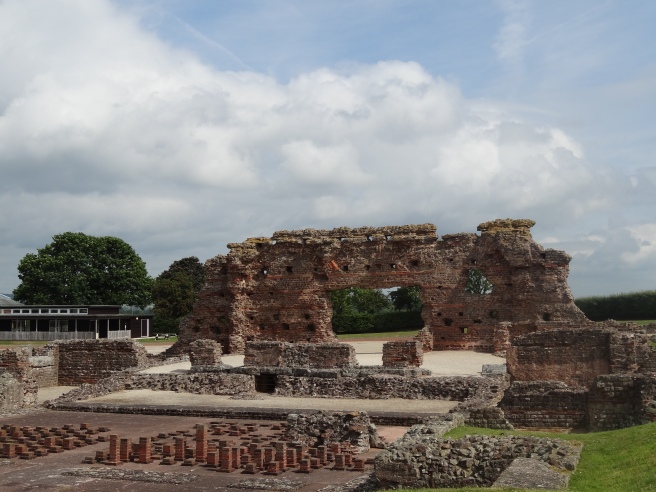 The rough stone of tremendous arches and the enormous rooms of the gymnasium are familiar yet otherworldly. There’s a charge to the air, suggestive of the activity and volume of people a building this size could have held. The smooth pots, crumbling firewood and heavy scent of wood smoke in the roundhouses hold a welcoming atmosphere. Standing in them it feels as though the occupants have momentarily stepped away. The sense of place here is calmer, even though the close proximity of houses and animal paddock would have made for a lively soundtrack.

Sitting on a log covered in thick blankets, feeling the warmth of the fire and looking around in the sunlit-dim, the temptation to settle in is tangible. To shake out the blankets and lay on the bed, looking up at the straw roof; baked black by fire. To gather herbs and vegetables for the pot or poke at the red embers to release more warmth. Fingers itch to pick up the loom and continue weaving and though the wind is buffering the hillside, little of it reaches inside the open doorway. 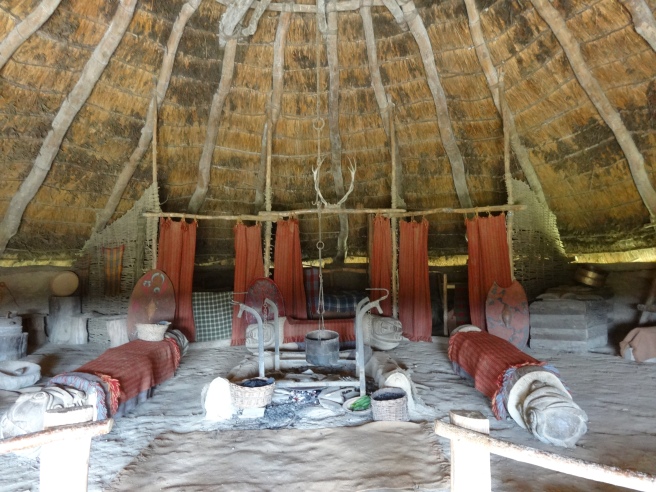 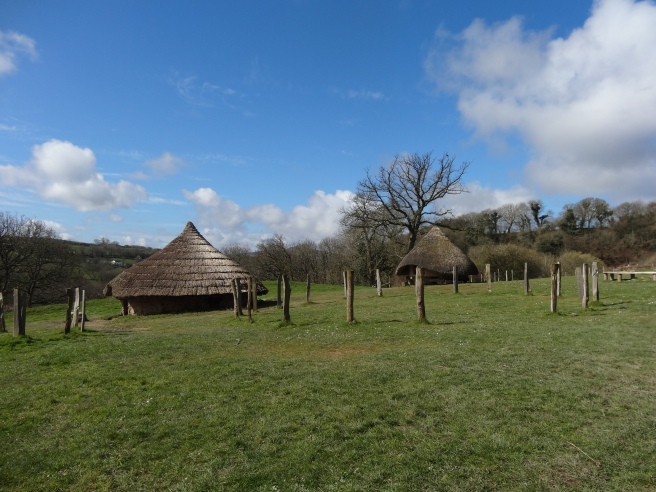 Outside, the circle of stumps with planks laid over them, is where I soak in the sun. Winding treasures I’ve found on my walk, into a simple wreath, I study the carvings in the wooden logs that form the door frame. The sky reveals its concave quality, with nothing taller than the trees, to interrupt its expanse. There’s something appealing at how it cradles everything and also appears like the floor of another world beyond.

The buildings, though replicated, stand on ground where a villa and Iron Age village once stood. The hard floors and square rooms are similar to modern housing and the open plan design and blankets are also familiar. I took inspiration from these spaces, when writing about low-impact housing for displaced people, in my novel Sky Drum.

We all experience a sense of home, when sharing food and conversation. Besides people and animals, some plants, books and blankets are favourite ways I personalise a space. What things to you represent home?

One thought on “Ancient Abodes (Into Nature)”